FALL COLORS WHEN & WHERE THEY’LL PEAK 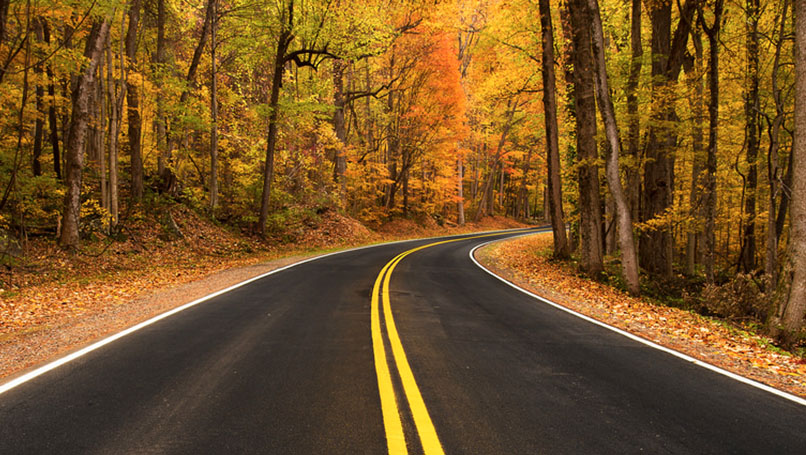 FALL COLORS WHEN & WHERE THEY’LL PEAK

The steaminess of summer has finally worn off and most of the country is getting that first cool nip in the air, which means it’s time to crack open that pumpkin beer, break out your decorative gourds, and get outside to see America’s annual show of fall colors. Above-average summer moisture and temperatures this summer mean this year’s foliage may come a tad later than usual, but should be especially good. To make sure you can perfectly plan your leaf peeping to catch the colors at their absolute peak, SmokyMountains.com has released its annual interactive fall foliage forecast map, predicting when and where the leaves will be at their most vibrant.

No forecast is 100% accurate and a number of factors affect when and for how long trees with see their peak — for instance if a storm rolls through and blows all the leaves out of the trees once they’ve turned, you might not have very long to look at them. The best plan? Put on your favorite sweater, get outside, and say hello to Mr. Autumn while you’re out there.

The Fall Foliage Forecast & Prediction Map for 2018
Unlike last year, when almost all of the country had reached peak or beyond peak by early October, the forecast suggests peak will arrive slightly later in 2018, thanks to “heavier precipitation and warmer temperature trends expected through September,” according to the experts at SmokyMountains.com. Conditions in September have a huge impact on the colors you’ll see: “While fall color vibrancy is completely dependent on weather, the most critical month is September. Generally speaking, crisp days combined with plenty of sunshine throughout September will produce the best colors.”

SmokyMountains.com admits that no fall foliage prediction tool or forecast is perfect, but as the organization puts it, the map is “meant to help travelers better time their trips to have the best opportunity of catching peak color each year.” It’s also worth noting that there are still some factors at play that can influence when the leaves will reach peak in some places and how beautiful they’ll be.

“Although simply entering rainfall, temperature data, elevations, and other data points into a model will never be 100% accurate, this combined with our proprietary, historical data drives our model to become more accurate each year,” Wes Melton, co-founder and CTO of SmokyMountains.com, said in a statement. “However, unexpected rainfall that falls well outside of expected trends can always change the peak foliage dates and brilliance.”

As for New England, specifically, photographer and fall foliage expert Jim Salge of Yankee Magazine also expects an explosion of beautiful fall colors across the region, but just a tad later than usual. As Salge explains, El Nino is expected to develop, which will lead to warmer-than-normal temperatures persisting through much of fall.

“Putting this all together, we are fairly confident that the leaves will be bright, bold, and healthy when they begin to change in most areas, and a colorful, vibrant show should be on tap across most of New England this year,” per Salge’s report. “We also believe that the leaves, especially up north, will turn a bit later than historical averages.” 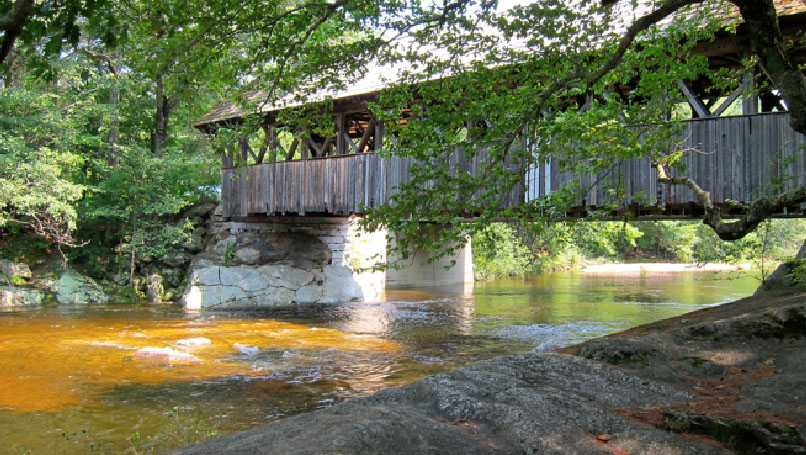 NEWRY, MAINE
The Best Places to See Fall Foliage?
Perhaps the only real challenge you’ll face before diving into all of the fall colors is deciding on where you want to go. Check out past reports we’ve done on the best places to see fall colors in New England, and the best places for foliage in the rest of the country.

Another option to consider? Hop on a train and look longingly out the windows, without having to worry about on-coming traffic. We’ve catalogued America’s most charming train routes to take in the fall.

GREAT SMOKY MOUNTAINS NATIONAL PARK
So What Makes Leaves Change Colors to Begin With?
Chances are you don’t remember this lesson from grade school science class, so here’s a quick refresher. To understand why leaves turn red, orange, yellow, or brown, you first have to understand why leaves are green. It all starts with photosynthesis and chlorophyll (maybe Billy Madison was wrong). Specifically, leaves appear green, thanks to the millions of chlorophyll cells that are generated during photosynthesis in the tree’s chloroplasts, the organelles that carry out the process. And here’s the thing: Without all of that green chlorophyll, leaves would always look like they do in autumn.

The constant creation of chlorophyll throughout spring and summer gives trees and other plants their vivid green hues because it masks other compounds in the leaves that would otherwise make them appear yellow and orange. In other words, those are the leaves’ true colors. In fall, photosynthesis slows and eventually stops due to the significant decrease in sunlight trees receive — allowing the leaves to return to their “natural” orange, yellow, and red colors.

As the University of Vermont explains, each of the colors comes from specific pigments in the leaves: carotenoids and anthocyanins.

“‘Carotenoids’ are leaf pigments responsible for yellow and orange colors in leaves, particularly in fall. Think of orange, as in carrots. They are present during the season but masked by the green chlorophyll, except in plants that may be stressed or with yellow leaves normally,” per the university. “… ‘Anthocyanins’ are the pigments responsible for red and purple fall leaf colors. These are only produced in the fall when sugars are trapped in the leaves. They function similar to the carotenoids, and help the leaf use up any remaining energy as chlorophyll disappears. Abundant dry weather and sunlight lead to more sugars in leaves, which in turn leads to brighter fall reds. More red in leaves, and earlier reds, can come about too from plant stresses, low nutrition, and near but not freezing temperatures.”

The colors you see also depend on the type of tree. Some trees — beeches, hickories, tulip poplars, and birches — have mainly yellow and orange fall leaves. You’ll find red leaves on trees like sumacs, sweet gums, sourwoods, mountain ashes, scarlet oaks, red maples, and some sugar maples, according to UV. 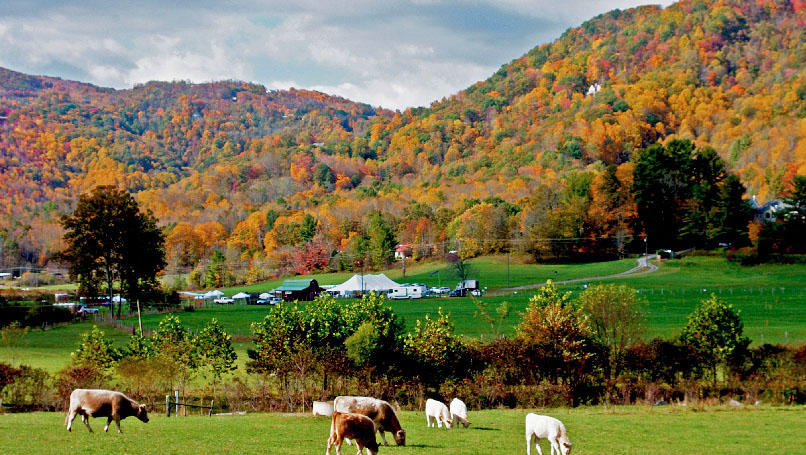 VALLE CRUCIS, NORTH CAROLINA
When & Where Peak Fall Colors Will Arrive for 2018
Here’s your 2018 fall foliage cheat sheet, based off the prediction map from Smokey Mountains.

October 2
Where: Just in time for the start of everyone’s favorite fall month, parts of six states — Vermont, New York, Pennsylvania, Minnesota, Colorado, and New Mexico — are forecast to be “near peak.” Additionally, much of the northern half of the country will see the leaves beginning to change if they haven’t already.

October 8
Where: Peak finally arrives in much of New York, Vermont, and northern parts of Pennsylvania, while most of the surrounding areas will reach “near peak,” so that’s likely where you’ll want to be to see the most colorful displays. The forecast also calls for the leaves to reach peak in northern Minnesota and central parts of Colorado and New Mexico. Only states in the South will still be waiting for leaves to change at this point.

October 15
Where: Even larger expanses of the same regions will see peak, including several additional states like Maine, New Hampshire, Massachusetts, Connecticut, Rhode Island, New Jersey, Michigan, Wisconsin, North Dakota, Montana, Idaho, Wyoming, and Utah. Meanwhile, the areas that reached peak in the prior week are forecast to be “beyond peak” at this point and only small areas of the South remain unchanged.

October 22
Where: Portions of even more states are expected to enjoy the height of the fall beauty, including Maryland, Virginia, West Virginia, Ohio, Indiana, Illinois, Iowa, South Dakota, Nebraska, Kansas, Texas, Arizona, Washington, Oregon, and California. This appears to be peak peak, if you will, and change will be apparent in some way in every state on the map.

October 29
Where: Peak will begin to move farther south to states like Virginia, Kentucky, and Tennessee as well as to greater expanses of California, Oregon, and Washington. However, all of the Northeast, upper Midwest, and much of the areas around the Rockies are expected to reach “beyond peak” as November nears.

November 5
Where: Most of the country will be beyond peak at this point, especially places in the North that are known for gorgeous fall colors. However, peak will continue to expand to new places in the South and almost all of California.

November 12
Where: As winter begins to take hold, only parts of the South are not expected to be “beyond peak.” Elsewhere, there likely won’t be much left to see. “Beyond peak” dominates the map.

November 19
Where: Leaf peeping season is all but officially over now that the winter solstice is only about a month away. At this point we recommend you move on from your pumpkin beer and move on to a good, hearty stout.