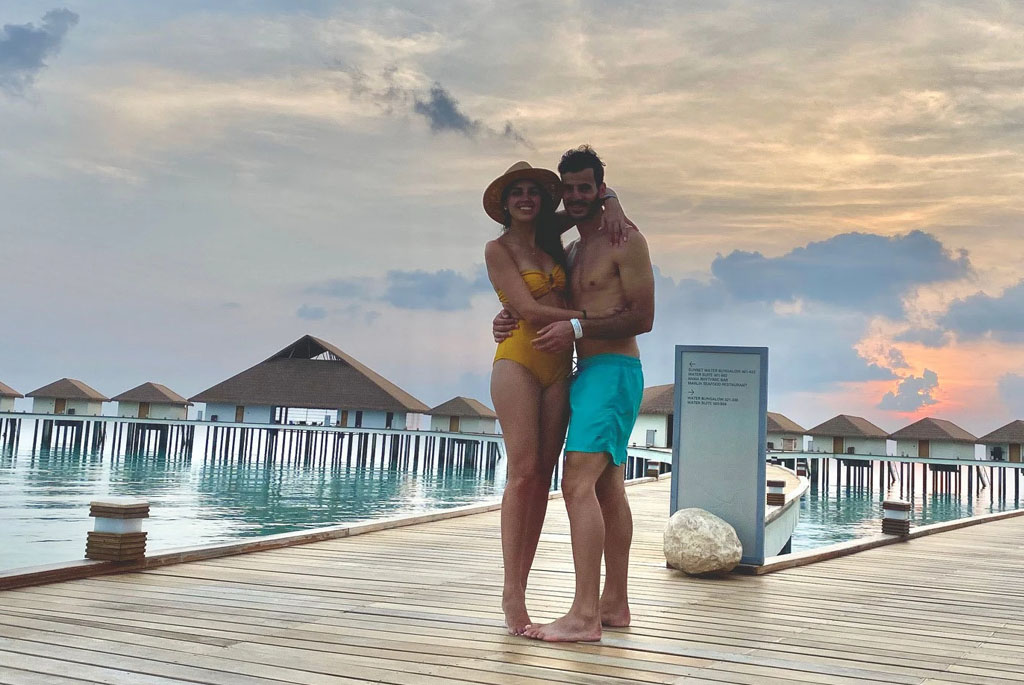 Olivia and Raul De Freitas are currently on their honeymoon, at a five-star resort, in the Maldives, a nation composed of more than a thousand tiny, idyllic islands in the Indian Ocean, like a trail of smashed crystals scattered on a slab of blue glass. For years the subject of fantasy photo spreads in glossy magazines, featuring luxe bungalows on stilts, in unreal aquamarine water, it was an obvious choice for their romantic getaway

The couple arrived just married from South Africa, where they are citizens, on Sunday, March 22, planning to stay for six days. For a 27-year-old teacher and a 28-year-old butcher, the holiday “was an extravagance,” Ms. De Freitas said. But since they hadn’t lived together before exchanging vows, it would be a short, firecracker of a launch to their marriage.

Still, they had some concerns about the trip, considering the mounting travel restrictions imposed in light of the new coronavirus outbreak around the world. But nothing specific that would affect them had been announced, and their travel agent assured them that, whatever policy was forthcoming, all South African citizens would be allowed back home. Go ahead and have a great time, they were told.

By Wednesday, they received notice that their country’s airports would all be closed by midnight Thursday. Flights back to South Africa are five hours to Doha, Qatar, a three-hour layover, and then nine hours to Johannesburg — so even if they scrambled, and even if they could get a flight, the complexities of leaving their remote island ensured they’d never make it home in time. 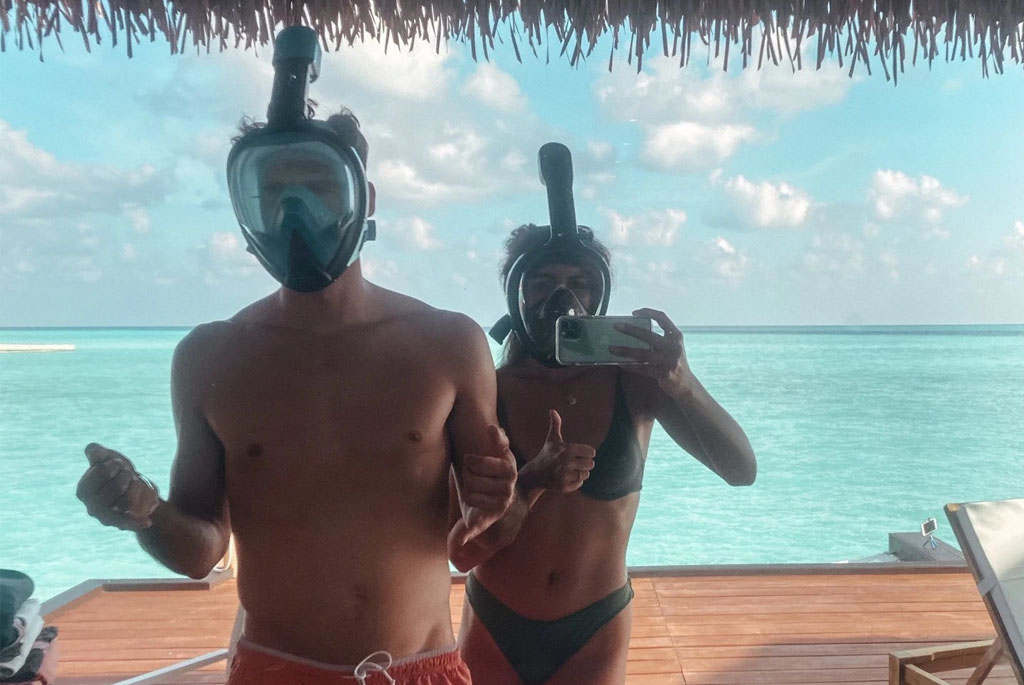 As much of the world rapidly ground to a halt, the few other guests still at the resort last week escaped to their respective countries. The last of them to leave, Americans, had to wrangle permission for a flight to Russia, before returning to the United States.

The couple considered taking the hour-and-a-half speedboat ride to the main island and trying their luck at the airport. But the Maldives had also announced their own lockdown around the same time, banning any new foreign travelers. If they left the resort, they might not be allowed back in. So, they stayed.

Mr. De Freitas, described by his wife as the calm one, took the strange turn of events in stride. This would all get sorted out, and, besides, they were in paradise. Ms. De Freitas, naturally, shared some of her husband’s delight, but sensed a logistical nightmare worthy of Kafka was about to ensue.

Everyone could split the cost, the message noted, but the government had only connected with around half of the 40 people; of those 20, many were unable or refusing to pay. The fewer the number of people on board, the more expensive each share would become. Even so, after several days of discussions between South African representatives and the Maldivian Foreign Ministry, the flight still hasn’t been approved.

By Sunday, they were the only guests at their resort, the Cinnamon Velifushi Maldives, which normally is at capacity this time of year, catering to some 180 guests. (“Room rates start at $750 a night,” its website still says.) The resort comprises the entirety of its speck of an island. There is nowhere to go. The couple reign like benign yet captive sovereigns over their islet. The days are long and lazy. They sleep in, snorkel, lounge by the pool, repeat. 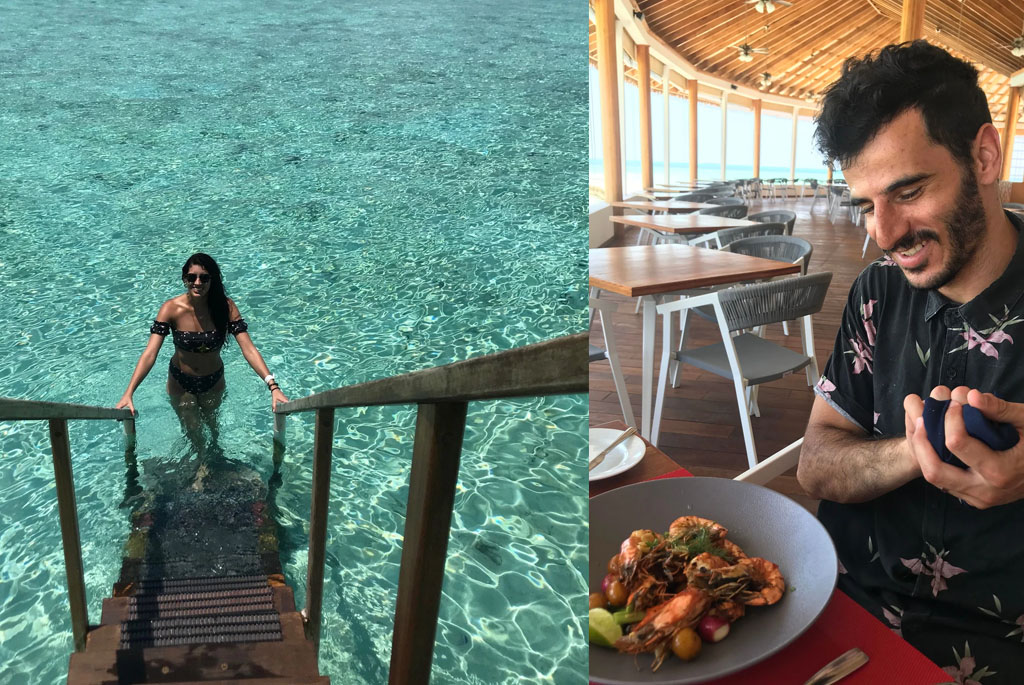 The resort’s full staff are at hand, because of the presence of the two guests. Government regulations won’t allow any Maldivians to leave resorts until after they undergo a quarantine that follows their last guests’ departure. Accustomed to the flow of a bustling workday, and the engagement with a full house of guests, most of the staff, having grown listless and lonely, dote on the couple ceaselessly. Their “room boy” checks on them five times a day. The dining crew made them an elaborate candlelit dinner on the beach. Every night performers still put on a show for them in the resort’s restaurant: Two lone audience members in a grand dining hall.

At breakfast, nine waiters loiter by their table. Hostesses, bussers and assorted chefs circulate conspicuously, like commoners near a celebrity. The couple has a designated server, but others still come by to chat during meals, topping off water glasses after each sip, offering drinks even though brimming cocktail glasses stand in full view, perspiring. The diving instructor pleads with them to go snorkeling whenever they pass him by.

There’s something forlorn, unsettling even, about wandering an empty space that’s supposed to be full. Reclining alone, amid the silent, abandoned bank of beach chairs, the equatorial sun shimmers off the sea to the horizon, browning skin and bleaching driftwood. “We’ve started playing a lot of table tennis and snooker,” Ms. De Freitas said. Mr. De Freitas has also taken to joining staff soccer games in the afternoons.

Somewhere, beyond all this, the world roils. After an early panic and local quarantine around an ill tourist, there have been fewer than two dozen reported total cases of the new coronavirus on Maldivian islands; the majority of people diagnosed have recovered already.

Most recently, they’d heard that flight permissions are supposed to be sorted out by Monday, April 6. That was an extension from April 1, so these dates seem to merely be optimistically penciled in. No matter: The latest wrinkle, they were told, is that the Maldivian airline crew assigned for the charter won’t fly anyway, needing to rest for a day before their return flight to the Maldives. But the South African government said if they deplane they’ll be quarantined there for 14 days. This is, apparently, a deal breaker. And a flight originating from their home country is not being offered as an option.

The lockdown in South Africa is supposed to last until April 16. But, like everywhere, decrees about travel and movement are continually changing.

“It’s incredible that we get this extra time,” Ms. De Freitas said. But the financial toll is weighing on them, heavily. Though the couple has been paying a generously discounted rate, the bill grows ever larger. Each day that ticks by is a chip taken out of their savings that had been set aside for a house down payment.

To their escalating endless honeymoon debt, they can add the unknown price of two tickets on what may likely be a near-vacant 200-seat jet. “Everyone says they want to be stuck on a tropical island, until you’re actually stuck,” Ms. De Freitas said. “It only sounds good because you know you can leave.”

On Sunday, April 5, according to the couple, they were given an hour’s notice by the embassy, communicating via WhatsApp, to pack their bags. After saying their goodbyes and thank-yous, they were taken by speedboat to another five-star resort, where South Africans in the Maldives, about two dozen in all, are being consolidated. The local government told them it would subsidize a large portion of the cost of their stay.

As for their original hotel’s staff, they have been told they must remain for two weeks after the guest’s departure. According to the hotel management, they have been, and are still being, paid.