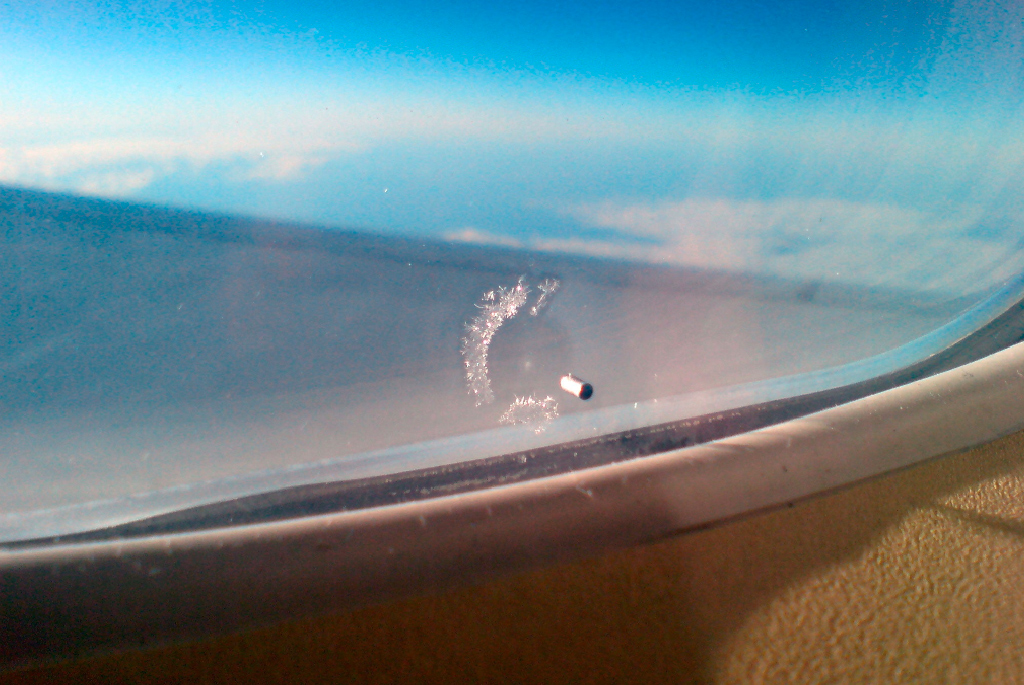 If you were among the estimated 1 billion passengers served by US airlines last year, you too might be intrigued to learn why you always have a ferocious craving for Bloody Marys on planes, or why the in-flight movies turn you into such a blubbering sentimental idiot. So listen up, pub trivia nerds: Here are 25 things you probably didn’t know about flying.

1. You lose out on a third of your taste buds during flights
*Seinfeld voice* Whaaaat’s the deal with airline food? It’s not bad just because airlines hire bad chefs. About a third of your taste buds are numbed at altitude, which is why that $8 Mediterranean snack box always tastes, eh, just OK. This also has the effect of enhancing the savory flavors in tomato juice — a big reason why people crave Bloody Marys and think they taste so much better on planes.

2. It’s impossible to lock yourself in the bathroom
You ever notice how the flight attendants flip a little switch on the lavatory door before takeoff and landing? That switch locks the door so it won’t fly open and can be flipped on or off at any time. So if they think you’re in there joining the mile high club or smoking a cig, they can fully barge in and bust you.

4. Your flight crew only get paid when you’re in the air
For reasons stipulated in those collective bargaining agreements you hear about during airline strikes, pilots and flight attendants only get paid for the hours the plane is in the air. Meaning, it’s not their fault if your flight’s been delayed or you’re stuck sitting on the tarmac. So be nice, wouldja?

5. Airplane air is quite literally as dry the Sahara
You may have noticed how your hands get dry and your throat feels like sandpaper when you fly. That’s because the pressurized air in the cabin is kept below bone-dry 20% humidity — just about the average humidity of the Sahara.

7. Dimming the lights for takeoff and landing isn’t a mood effect
It’s done so passengers’ eyes can adjust to the dark, just in case there’s an emergency that shuts off the lights. That way people aren’t running around blind in sheer chaos.

8. That little hole in the plane window might save your life
You ever notice that little hole in the bottom of your window? That’s the breather hole, and besides keeping in warm air so you don’t get too chilly, it regulates pressure — ensuring that should anything happen to the outer pane of the window, the pressure won’t cause the inner pane to break, at which point you’d suddenly be sucking in oxygen at 35,000 feet. Consider it Phase 1 before you get to the masks.

9. More people die from plane exhaust than plane crashes
Plane crashes — especially in large commercial jets — are extremely rare now. Fewer than 1,000 people die in plane crashes each year, including small planes. But a 2010 MIT study found that about 10,000 deaths a year are attributable to toxic pollutants emitted by jet engines. So maybe think twice before lining up behind that runway in St. Maarten.

11. The toilets are actually vacuums
Unlike your toilet at home that siphons water down into the sewer, airplane toilets are basically vacuums: a valve opens when you flush, and the air pressure sucks what’s in the bowl down into a tank located in the tail of the plane. It uses about half a gallon of water and can flush in any direction. But older planes with outdated toilet systems are still up there flying, hence the occasional reports of raw frozen sewage falling from the sky.

12. The wingspan of an Airbus is double the length of the original flight
Wilbur and Orville Wright’s first venture into the skies in 1903 traveled only about 125 feet. Today, the wingspan of the largest commercial airliner, the Airbus380, is 262 feet.

13. The average Boeing 747 has around 150-175 miles of wiring inside it…
That’s almost enough to stretch across Massachusetts. Beyond the wiring, it also has 6 million parts.

15. The tail is the safest place to be during a crash
Again, plane crashes are totally rare. But a 2007 study by Popular Mechanics looked at 36 years of NTSB crash data and found the back of the plane gave passengers the best chance for survival. It’s also the most strategically advantageous for befriending your flight attendant and getting free things! Last off the plane wins first in the game of life.

16. Planes can fly with one engine, and land with none
Not that the pilot is going to get on the intercom and tell you about it, but commercial jets are designed to fly with only one operable engine. And can glide their way to the ground with no engine power at all. So if your plane breaks down mid-air, you’ll still likely land in one piece!

17. It’s impossible to technically “die” on a plane…
It’s rare, but it does happen; sometimes a passenger kicks the bucket mid-flight, yet the flight crew cannot declare a person dead for legal reasons. The most common thing done with corpses is to move them to an empty row. Where are there most often empty seats? Up in first class, of course. Pretty steep price for an upgrade, though on some airlines totally worth it.

18. At any given time, there are 9,700 planes and 1.2 million people in the sky
The exact numbers, according to flight-tracking service FlightAware, are on average, 9,728 planes with a total of 1,270,406 people. That would make the skies the 156th most populous country in the world, right between Estonia and East Timor.

20. Many commercial planes still have ashtrays
Smoking has been banned on commercial flights for over 25 years now, but most planes still have ashtrays. Quite confusing, but the FAA requires them in case someone completely disregards the signs and decides to light up anyway. That way there’s not a lit cigarette floating around the plane that could potentially start a fire.

22. If you find yourself getting weirdly emotional on planes, you’re not alone
A few years back, Virgin America conducted a highly scientific study on its Facebook page, in which 41% of men admitted to crying at in-flight movies, and 55% of people said they felt more emotional while flying. We, too, have straight up bawled watching Gran Torino on a flight, so we looked into it — the stresses of travel, plus the decreased oxygen and mild hypoxia one experiences at altitude, has a major effect on moods. It’s not just you.

23. A Boeing 767 holds 1,200 minivans worth of fuel
That’s 23,980 gallons, and it can be filled up in 28 minutes. It also puts enough air through its engines to fill a Goodyear Blimp in seven seconds.

24. A Boeing 787 can fly 10,000 miles on one tank of gas
That means it could fly the circumference of the Earth and only need to stop for gas twice. Dads around the world, rejoice!

25. If you think of the world as a globe, planes would be flying about 1/10th of an inch off the surface
This is assuming a cruising altitude of 35,000 feet. It’s a big ‘ol sky up there.