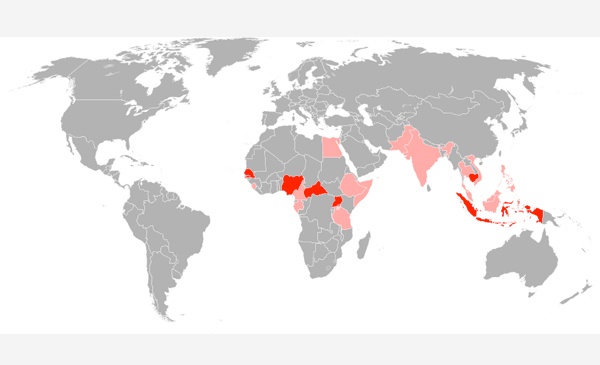 Evidence is growing that there may be a possible relationship between the mosquito-borne virus and a birth defect known as microcephaly.
The Centers for Disease Control and Prevention revealed this week that it is considering a travel warning for countries where the Zika virus is circulating.

“We’re trying to get out some comprehensive travel guidelines that women can follow, with more specific information for pregnant women,” Dr. Lyle Petersen, director of the Vector-Born Disease division of the National Center for Emerging and Zoonotic Infectious Diseases at the CDC told CNN. “We expect to have them out in a day or so.”

And while nothing has been confirmed as of yet, a primer on the virus, its symptoms, and why the warning may soon appear can help travelers prepare. Update 1/16: The CDC has issued a travel alert for people traveling to countries and regions where the transmission of the virus is ongoing: Brazil, Colombia, El Salvador, French Guiana, Guatemala, Haiti, Honduras, Martinique, Mexico, Panama, Paraguay, Suriname, Venezuela, and the Commonwealth of Puerto Rico.

What is the Zika virus? A virus in the same family as West Nile, chikungunya, and dengue, Zika draws its name from the Zika forest in Uganda, where it was first identified in a monkey in 1947. The virus is primarily transmitted to humans through bites from Aedes mosquitos, whose peak biting hours are early mornings and late afternoons. Once a rare disease, Zika has seen sporadic outbreaks over the years—mostly contained to Southeast Asia and Africa—but is now considered an emerging infectious disease due to a deluge of recent cases in Brazil.

Why is this happening now? Typical side effects of someone bitten by the Zika virus are similar to those of dengue fever or even a cold—think mild fever, rash, muscle pain, joint pain, headaches, pain behind the eyes, and pink eye. New statistics, however, show that the virus may have more long-lasting effects. Traces of the Zika virus were found in fetal and newborn tissue of Brazilian babies with a birth defect called microcephaly, which typically comprises small heads, severe brain damage, and developmental issues. Brazil saw some 3,000 cases of microcephaly in 2015—a drastic increase from their average of 200—and doctors believe that given the duration of the usual nine-month pregnancy, there could be more cases on the way.

What countries are risky? Brazil, for one: an official there even advised women not to become pregnant after the virus was linked to an increase in microcephaly. Colombia, El Salvador, French Guiana, Guatemala, Haiti, Honduras, Martinique, Mexico, Panama, Puerto Rico, Paraguay, Suriname, and Venezuela have also reported local transmission. A traveler from Texas—who recently returned from Latin America—was confirmed to have the virus, but no transmission within the 50 U.S. states has been found. Update 1/19: A baby in Hawaii has been confirmed to have microcephaly, and had also been infected with the Zika virus. The CDC wrote in a statement that “Neither the baby nor the mother are infectious, and there was never a risk of transmission in Hawaii.”

How can I prevent it? Short of avoiding these areas, stick to the old standards: using insect repellant and wearing protective, appropriate clothing. If you can, stay and sleep in screened-in or air-conditioned rooms. There is no vaccine against the virus.

This post was originally published on January 15 at T&L . This the latest updated information.