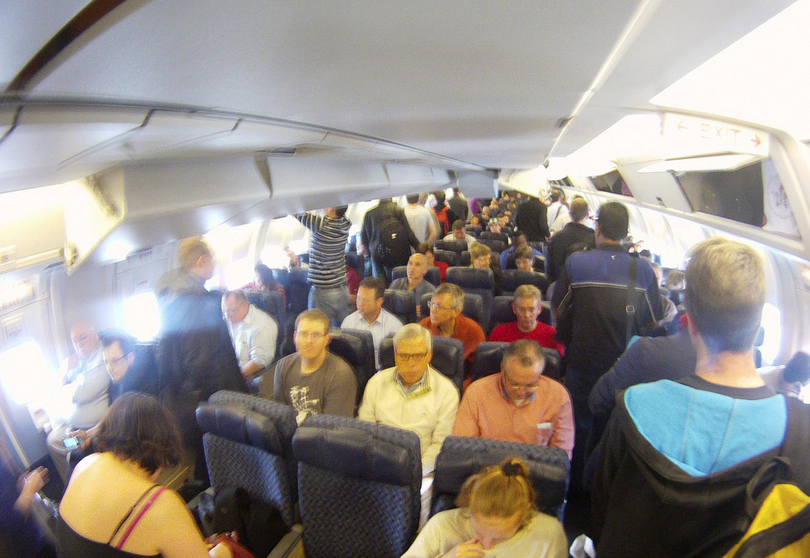 FOR those of us compelled to fly in cattle class, life is becoming more and more miserable. On that point most of us agree. But who is to blame?

Opposite perspectives can be found at the New Yorker and Bloomberg. Tim Wu at the New Yorker wrote recently that the increasing hardship can be put down to premeditated malice by the airlines themselves. He calls the phenomenon “calculated misery”. The problem, he says, is that carriers now make a big chunk of their money by charging for additional services, be it a slightly better seat, checking a bag or priority boarding. Quoting research by Ideal Works, an airline consultancy, he points out that global airline ancillary revenue reached $31.7 billion in 2013, with United Airlines accounting for $5.7 billion of that by itself.

This reliance on ancillary fees, says Mr Wu, has consequences:

…the fee model comes with systematic costs that are not immediately obvious. Here’s the thing: in order for fees to work, there needs be something worth paying to avoid. That necessitates, at some level, a strategy that can be described as “calculated misery”. Basic service, without fees, must be sufficiently degraded in order to make people want to pay to escape it. And that’s where the suffering begins.

It is a seductive argument: our misery is all the fault of greedy corporations squeezing innocent consumers. But regular readers of Gulliver will know by now where we are going with this. Our view would be better encapsulated in the headline of the Bloomberg piece, written by Megan McArdle: “Hate flying? It’s your fault.”

We would perhaps have couched it in less confrontational language, but the reality is that customers are effectively demanding worse service. While we might say in surveys that we care about quality, when it comes to clicking the button to purchase a flight, we overwhelmingly choose an airline on price. And so carriers do everything they can to give us what we want: cheaper fares over a pleasant experience. This is the reason that Spirit Airlines, by far-and-away the most complained about airline in America, is hugely profitable, while Virgin America, a far more accommodating airline, has historically struggled to make a profit. As Ms McArdle (who used to write for The Economist) explains:

High-fixed-cost, low-marginal-cost industries are characterized by brutal competition and punishing boom and bust cycles. Which is exactly what we see in the airline industry. Over the last 15 years, the three remaining major airlines—Delta, United and American Airlines—have averaged profit margins of 3 to 8 percent, with periodic dips into deep red. Things aren’t getting more crowded and fees higher because it’s a good way for them to shake a little more off the money tree. Rather, the only way that they can make any money is to schedule more flights, cram more seats into the planes and manage their yield so that the planes fly fuller. The result is unpleasantly reminiscent of cattle walking up the slaughterhouse chute.But unlike the cattle, we have to claim our own share of the responsibility. Ultimately, the reason airlines cram us into tiny seats and upcharge for everything is that we’re out there on Expedia and Kayak, shopping on exactly one dimension: the price of the flight. To win business, airlines have to deliver the absolute lowest fare. And the way to do that is…to cram us into tiny seats and upcharge for everything. If American consumers were willing to pay more for a better experience, they’d deliver it. We’re not, and they don’t.

For us cattle, that is something worth ruminating on.

Courtesy  BY B.R. The Economist