How to do Broadway on a budget

How to do Broadway on a budget

Posted at h in Land, travel news by 0 Comments
0 Likes 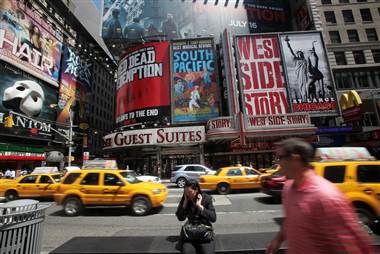 Looking to save money on expensive Broadway tickets? There are a number of services that can help.

It’s been a few years since we’ve written anything about Broadway. We’ve already sung the praises of saving money on Broadway shows with TKTS and made an instructional video about how to take advantage of standing room only, general rush and student rush tickets. Since our last story on Broadway ticket savings, there have been a number of great websites created to help you save even more money on Broadway tickets. Whether you’re a student, senior or just an admirer of all things theater, here are some websites you need to know about.

StudentRush.org, something I now check several times a day, offers free tickets — yes, you read that right — to Broadway and Off– Broadway shows on a regular basis. All you have to do to get access to the list is sign up for their “Will Call Club” e-mails. The only thing you have to pay is usually a $5 handling charge, depending on the show, that is paid via Paypal. You then receive an e-mail confirmation and instructions as to where to meet the StudentRush.org representative.

While the company is named StudentRush.org, the website states, “Anyone may join this site, although some of the discounts are restricted to current students with ID. All free ticketed events and non–ticketed events are available to anyone.” You’re able to purchase up to four tickets at a time; just pick them up from the representative before heading to the theater. Apparently it’s a seat–filler type of thing — show producers provide them with a certain amount of tickets for each available show. Remember to check back a few times a week for the most updated list of opportunities.

Thanks to this website, I’ve been able to see “Baby, It’s You” — twice — and I surprised my father with a trip to see “Rain: A Tribute to the Beatles” a few months ago. Each time, I paid $5 per ticket, picked them up from the representative, and was given excellent seats — I’m talking front–row–almost–center for “Rain” and middle-mezzanine for “Baby, It’s You.”

It should be noted that those under 35 are about to hit the budget ticket jackpot: The Roundabout Theatre Company understands that students — and a few unpaid interns out there — love going to shows but high ticket prices make that quite a struggle. Seeing our plight, they’ve come up with HipTix, a program that allows anyone between the ages of 18 and 35 to purchase $20 tickets to shows at their theaters — a great deal if you’re hoping to see the Tony Award winning show, “Anything Goes.” Just call their box office, sign up for HipTix and even order tickets (2 per person only) to a show—be sure you call to order tickets at least one month in advance, as their shows tend to sell out quicky. Last I checked, tickets to “Anything Goes” were being offered for early October, so plan ahead.

The Big Apple, the USA’s largest city, thrives on relentless energy and buzz. Here are its highlights.

A list of discounts for students and seniors can be found at NYTheatre.com, but it’s always a good idea to contact the theater you’re interested in to see what their specific policies are in regards to discounted rush tickets.

My next discovery is Bloomspot. Think of it as Groupon for Theater. Same idea: Sign up for free with your e-mail address and let the deals come to you. There was an offer for a New Orleans Jazz show at Lincoln Center recently, so it seems to be entertainment–based, not strictly for Broadway shows, but still offers great deals.

I recently came across a new program that lets theatergoers accumulate “Show Points” to exchange for discounted Broadway show tickets. Audience Rewards has you sign up for free using your email address, and you are given the option to earn points by playing trivia games about different shows, purchasing items from partner sites, or you can simply earn points by buying tickets to shows and listing your membership number during the ordering process. This is definitely one of those websites I wish I had found earlier.

For more Broadway (and Off–Broadway) discounts, you can visit websites like Playbill.com, BroadwayBox.com, and TheaterMania.com for general price cuts, or look up discount codes to your favorite shows at NYtix.com.

I have loved going to Broadway shows ever since I was taken to see Cathy Rigby’s “Peter Pan” when I was five years old. (Once she “flew” over the audience at the end of the show, I was hooked!) It’s a huge passion of mine, as is saving money. Lately I’ve been taking advantage of rush tickets, but be warned, you are not always guaranteed a cheap ticket (usually $40 or less) if you’re in line. I learned this the hard way while attempting to see “Anything Goes” last week. No matter what time the theater opens, plan on getting there one hour earlier than you’re thinking of. I got to the theater at 9am, one hour before the box office opened. Had I been there at 8am, I would have gotten a ticket or two. Never underestimate the fact that someone else might be willing to wait longer. Lesson learned.