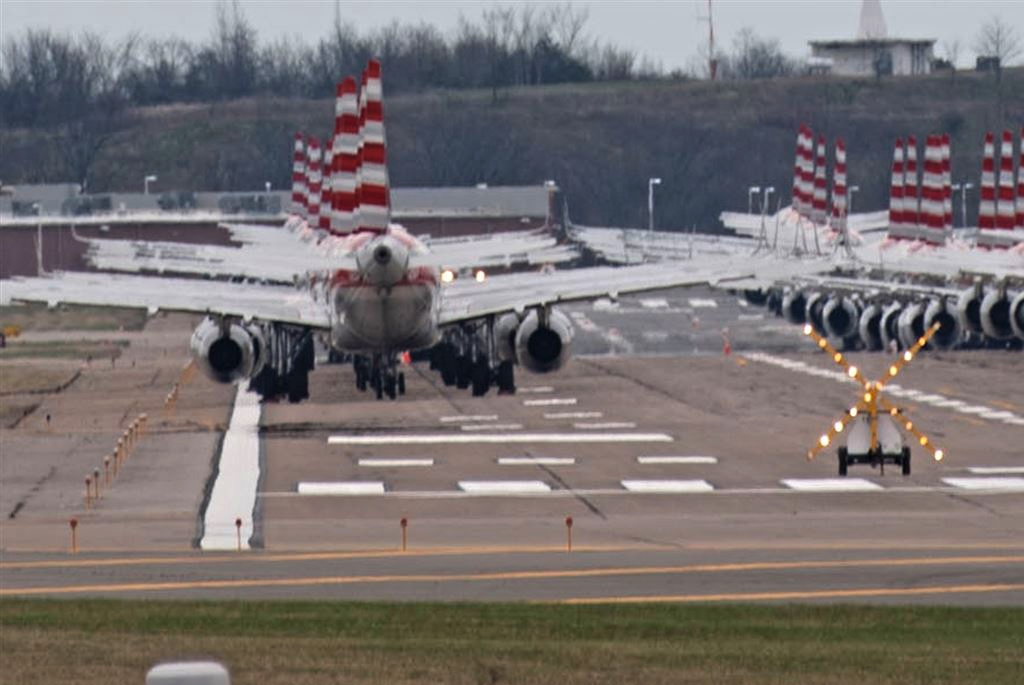 It’s much more complicated than just leaving planes at the airport.
As travel restrictions continue amid the spread of coronavirus, a record number of planes have been grounded.

At least 70 airlines around the world have grounded themselves completely, according to Cowen investment bank. These include heavy hitting airlines like Emirates and Etihad and low-cost behemoths like EasyJet. Other top carriers, including Lufthansa, Cathay Pacific, and Singapore Airlines have canceled up to 95 percent of their flights. U.S. carriers aren’t far behind: American Airlines is suspending 80 percent of its domestic flights and 90 percent of its international flights into May; Southwest has parked 50 of its 750 jets; United has cut its April schedule by more than 60 percent and is planning deeper cuts into June; Delta has at least 600 planes grounded so far.

At the current rate, up to 80 percent of the world’s overall fleet could be grounded as a result of coronavirus travel restrictions, Peter Harbison, chairman of the industry group Centre for Aviation, told the Financial Times earlier this month.

But what actually happens to all those aircraft if they aren’t ferrying passengers? Parking a plane for a few months is not as simple as leaving it at an airport and waiting for flights to start again. Turns out it takes a lot of effort and coordination for airlines to simply ground their planes.

Most U.S. airlines are shuttling their planes to long-term storage facilities, usually located in the desert, which specialize in keeping a plane operational even when it’s not flying. “It’s safe [for planes] out in the desert because it’s dry and no humidity,” Scott Butler, chief commercial officer at Ascent Aviation Services, where the amount of planes in storage have more than doubled to 200 aircraft since the coronavirus outbreak began in the U.S.

“It’s quite a big undertaking,” he says. Airlines are parking “various aircraft types: wide-bodies, narrow-bodies, new, old.” But even once airlines choose a storage facility and transport their aircraft, carriers are far from finished with managing their fleet. Most airlines, Butler says, need to pay for the maintenance upkeep on their planes, even when they’re sitting on the ground.

Keeping an aircraft parked can cost up to a whopping $30,000 per plane, depending on the maintenance regimen, according to the Financial Times.

The most expensive storage plan? An option called active parking mode. “This is if you want that aircraft to fly as soon as that day or tomorrow,” Butler says. “This involves running the engines every week, running major systems, lubes, just general flight line maintenance you would do between flights. Really just keeping it ready to go.”

All of that on-call maintenance and upkeep is expensive for the airlines, but in this case, it will still help them save precious cash reserves.

“It costs a lot to keep [planes] in storage,” says aviation analyst Mike Boyd. “The maintenance needed to get them ready for storage and the routine oversight of the fleet. But on the ground they are not costing $4,000 to $6,000 to operate per hour [like when they’re flying].”

Airlines are also putting some of their planes in so-called “short-term storage,” where they can sit for three months to just under a year, according to Butler. This means preserving the engines, removing all fluids, and getting everything covered in protective casing. “It can take as long as a week or three or four days to get that aircraft preserved” for short-term storage, Butler says. Those parked planes will also get routine check-ups throughout the month.

Most U.S. airlines are doing a mix of keeping planes ready to fly and longer term storage, Butler says. “Each aircraft varies wildly, and every operator has a little bit of a different program,” he explains.

Even once the coronavirus crisis starts to improve, Boyd says a lasting consequence will likely be that many airlines will have excess aircraft for years to come. “In some regions of the world, there is no way that they can absorb the parked aircraft anytime soon after a return to post crisis conditions,” he says. His forecasts show some Chinese airlines, for example, have about 150 to 200 more new-generation long-haul wide-body airliners than they will need anytime in the next five years.
And then there are carriers’ older, less efficient planes that are going into even deeper storage of a year or more, according to Butler. “That’s where you do have to run engines, you have to go further into the engines, recirculating oils, recirculating everything,” he says.

This phase of storage can also mean airlines begin using their own planes for parts. “Long term storage means taking components off of planes for use or sale,” Boyd says. Using or selling off an older planes’ parts, also called a “tear down,” is one of the last stops for an aircraft before the scrapyard. “The parts will be used all over the world, they’ll be reconditioned and refurbished and brought back to life for flying again,” Butler says.

Still, many airlines will take this opportunity to reassess their fleets, and not just how long planes will stay on the ground. As passenger demand is forecast to remain tepid for as long as two years, according to Cowen, many carriers will send their older, clunkier planes into permanent retirement to help scale down operations.

“For some airliners, it’s not a matter of grounded longer–it’s a trip to the metal knacker to be chopped into future beer cans,” Boyd says, noting that American has already said it plans to permanently sever its Boeing 767 and Boeing 757 planes from its fleet. “One huge casualty will be the A380–the 500-seat wonder,” he says, referring to the Airbus double-decker jet. “Most of them are being put down and won’t see the sky again.”